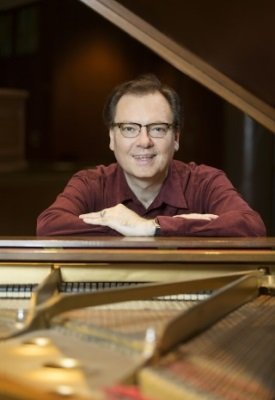 Dr. Trapp, as a student, was the recipient of many academic awards including the National Presser Scholarship and the outstanding student award of Pi Kappa Lambda honor society by unanimous vote of the faculty. He won first place in the national organ playing competition of Ottumwa, Iowa and several other Midwest competitions.

He received the BMus degree from Southern Illinois University at Carbondale, where he studied organ with Marianne Webb then spent a semester of private study with Catharine Crozier in California. Awarded a full scholarship to the University of Notre Dame, he studied organ with Craig Cramer and earned the MMus degree. His doctoral work in organ began at the Eastman School of Music in Rochester, NY with the late Russell Saunders. Lynn received the Doctor of Musical Arts Degree from the University of Kansas where he studied organ with James Higdon and Michael Bauer. He presented his doctoral project, The Legacy of Andr? Marchal in recital and lecture at St.-Germain des Pres in Paris, France.

He is the recipient of the Spirit and Truth Award from the Center for Pastoral Liturgy at the University of Notre Dame recognizing his outstanding work in music and liturgy.

In 2003, he received the Distinguished Alumnus Award from Perryville High School, his alma mater.